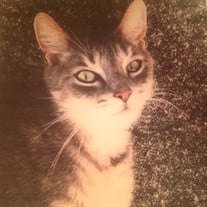 The testimony of Homie D. Cat as I knew him, by Homie's loving care giver, Daniel. While I was working at Inner City Ministry, a place where homeless and low income people could get food and clothing I noticed the many homeless, stray and feral... View Obituary & Service Information

The family of Homie D. Cat "Hornung" created this Life Tributes page to make it easy to share your memories.

A comforting word from you means a lot.

Send comfort and support when it's needed most.